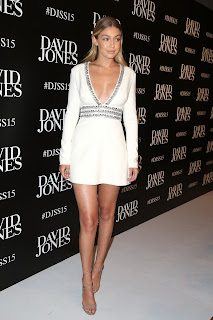 Gigi Hadid: secure in her reality

A climacteric approaches. Next month brings a significant birthday – the sort where everyone slaps you on the back and says things like ‘Don’t worry! Life begins at…’ or ’60 is the new 40’ or ’40 is the new 30’. I shall celebrate by keeping a long-postponed appointment with a gender identity specialist. (There may also be cake, but probably not at the same time.) I look to this guru to tell me, once and for all, am I transgender or am I just a transvestite who has allowed his hobby to become an obsession?

I have a compulsion to crossdress, but I feel no compulsion to crossdress in public; I don’t crave public validation in crossdress. I like the idea of an emergency escape hatch back into ‘normality’; I could not take an irreversible step (although I may have changed my body beyond reverse now). I want the specialist to tell me I’m normal; I want him to tell me I’m exceptional. I want answers to Big Questions.

Although I’ve made friends and vented in cyberspace, so far all my efforts to take my trans concerns into the real world have met with little success. I had a couple of sessions with a local therapist, at great expense, who didn’t tell me anything I hadn’t worked out for myself. I had an appointment at a laser clinic to see if I could get permanent beard removal. The employee did a ‘test patch’ on the cheek, causing a brown mark which she assured me would disappear in 24 hours. It didn’t and hasn’t – which seems to rule out the laser option for feminisation. I emailed a couple of academics whose interests appear close to my own; neither bothered to reply.

Any thought of bringing her into contact with the real world – whether it’s going out ‘dressed’ or just talking about her face-to-face with someone – seems to diminish her presence, as if she’s a creature of the shadows, always hiding from sunlight. It’s not just contact with reality but the mere prospect of such contact seems to drive her away. Since I made the appointment for next month, she has grown very shy, perhaps fearing her own extinction. Yet if she is so insubstantial that she could dissolve at the approach of reality, does she deserve to have any claims on me at all? I wrote earlier about my reluctance to reveal her ‘true’ name to anyone else, for fear either that the other person will gain power over her or that she will lose her power over me.

I’m a control freak. That’s why taking my gender concerns to the next level is problematic. By going public in however small a way and placing myself in the hands of professionals, I am letting go, unleashing something I may not be able to control – and it scares me.

At root, I’m acting out the controlled fantasy of being a young cis-woman. In the private theatre of my own home, if I wear the right clothes and do all I can to feminise the body underneath, this can be a convincing virtual-reality simulation. What it is not is a drag act. My assumption is that if I took her outside the house she wouldn’t survive contact with reality. But if she can’t be sustained in the world by an act of theatrical improvisation, what then is her power source? Where does she come from? And where does she go to when she disappears?

Two views of the sculptor’s art: 1. The sculptor looks at a block of stone and thinks, what can I make out of this? 2. The sculptor sees a form within the block which is struggling to break free. Which is she?

I used to read a lot of philosophy (but you probably guessed that already). I was especially drawn to the ‘dualist’ position, as set out by Descartes, which says there are two separate systems within a human being: a mental thing, the res cogitans, and a physical thing, the res extensa. His concern was how these two systems talk to one another. I doubt this theory finds much favour nowadays. Talk now is of a feedback loop of reciprocal influence, mind on body, body on mind, of intelligence ‘distributed’ throughout our entire body, so that having different bodies means thinking different thoughts. In their 2007 book How the Body Shapes the Way We Think, Rolf Pfeifer and Josh Bongard quote brain experiments showing that the initiation of a voluntary act is caused by unconscious neural activity. Counter to what you’d expect, the experience of conscious will kicks in only after the brain has started preparing for the action. As Rodney Brooks writes in his Foreword, ‘this book considers the physical manifestation of the body as primary. The stuff of intelligence has evolved in conjunction with the body and is more a modulator of its behaviour rather than a primary control system.’

So one of the major formative influences on mind is the body it is housed in. The mind doesn’t float free of the body. It was precisely the ambition to achieve flotation that has made me such a physically unhoused intellectual. But can I be successfully rehoused in a body that is only a rough approximation to the one I yearn for and where there has been no opportunity for the body to form the mind?

Still, once a Cartesian always a Cartesian. I persist in the belief that I’ve split into two people. All physical sensitivity is concentrated in her body; every inch of her skin is an erotic pressure-point. Meanwhile, my male self has consolidated into a disembodied intellectual. It looks like a case of classic mind-body dualism, except that the two elements have separated out into discrete organisms. This explains why she and he can’t coexist in the same space: when she is dominant and he recessive, he can’t do any of the things that he would normally do, because she doesn’t share those interests. This is a challenge, for it doesn’t fit either of the scenarios that are usually held up: either that she is the expression of a ‘truegender’ that is belatedly breaking through and should be given whatever space she needs to unfold, or that she can be integrated into my outwardly male form to make an integrated yet ‘polymorphously perverse’ individual.

A mind housed in an unwanted male body, and a body that perceives itself as a female work-in-progress but with no thoughts other than those inspired by the body. A simple but troubling dichotomy: F body without mind; M mind without body.

These two personae struggle for dominance. One difference between them is that, although she has certain biographical fixed points (her age, for example), she doesn’t have a consistent back-story (unlike my male self). Indeed, I’ve argued that her capacity for self-invention is a source of her strength. It might be suggested that this is the point where I could stage a land-grab, take her into myself, allowing her her body while gifting her my mind. Thus would integration be achieved. There’s no reason why she, a graduate in English Literature (another fixed point), shouldn’t be seriously interested in, let’s say, reading Shakespeare in the light of modern preoccupations with gender. My previous post was a nod in that direction. She could be a ‘hot’ postgraduette; she doesn’t have to be a bluestocking – unless I persist in maintaining a sexist dichotomy between male intellect and female body-centrism.


To sum up, I am a mind or intellect housed in an unwelcome male body, and I am an aspiring female body which seems divorced from mind (although it may possess something of the ‘embodied intelligence’ referred to above). If she is to go out into the world, I’ll have to engage mind and body: for both to be in lock-step, I must find her mind. Otherwise, contact with reality may turn out to be the nuclear option.

Sigh. I wish I had the self-possession and courage of trans activist Sarah McBride: